“Other Desert Cities” and Other Family Drama

I’m making an effort to write about productions and exhibitions that are still open and viewable. This is not. But in the midst of the current political season and with a possible movie adaptation of the play in the works—which I actually support for once—I thought a discussion of this Tony and Pulitzer-nominated production might be pertinent and apropos. So Other Desert Cities. It’s a story where everyone is right until everyone is wrong. It’s all fun and games until someone’s suicide didn’t actually happen. Wait, let’s back up.

In the trendy world of dysfunction, we’ve seen enough tension over Thanksgiving turkeys and fighting in front of tacky Christmas trees. But the tree glows merrily and is perhaps ironically comforting this time in the fussy, mid-century modern, southern California living room. After some meaningful sentiments, gently tender glances, and private conversations to establish emotional bonds (the familial equivalent of picking dodge ball teams in these narratives), the once peaceful tide changes before the cast heads out to dinner for the holiday (“Why do you think they invented country clubs? So hipsters and their Jewish parents wouldn’t have to cook on Christmas Eve”). The tenser discourse arises following the announcement of a book authored by daughter Brooke, who lives in a charming cottage on the East Coast. Oh, and she’s just recovering from a six-year depression with nothing to show for it but a failed suicide attempt (apparently something simple like “working mom” doesn’t satiate today’s audiences). Originally a novel, what now surfaces in the book is a detailed account of the family’s dark history with the eldest son. And her parents are not amused. It’s unnecessary and unproductive to recount the dark and complex details of the web of lovingly administered deceit and secrecy, but after a young life of political and social angst culminating in accidental involvement in terrorism (oops!), Polly and Weston help him fake his suicide and retreat to northern California for amnesty. The emotional blow quickly evaporates into a conflicted but ultimately tolerant understanding amongst the family members.

Rachel Griffiths and Stacy Keach in Other Desert Cities

Having seen numerous of these “family-centric serio-comedies” (more on that later) and coming from a close, connected family myself, it was refreshing to see the characters actually have a few moments of playful banter and loving gestures before the warm consoling morphed into stabbing claws. Really, when you’re all mature adults, what’s a few jokes about being late for an Al Qaeda breakfast meeting for a good laugh after a morning tennis game? It actually wasn’t until the manuscript was physically present that the emotional turmoil began and minimal shouting erupted (that was a nice benefit of having the story be about emotionally-repressive Republicans—they don’t so much shout, but drink). In The Lyons—commented on previously—the characters entered more contentious than presidential candidates who haven’t released their tax returns before the debate on the economy, their combative emotions bolstering from zero to sixty so rapidly as to prioritize this aggression as needing treatment before the alcoholism and blatant homophobia. In this Palm Springs mansion, emotions fester until they are dragged unwillingly out and plopped on a chaise lounge for some uninvited confrontation. In a touching maternal moment, as Brooke explodes in frustration, Polly raises her hand soothingly and says quite simply, “Alight, calm down. We’ll talk about it.”

August: Osage County—”You’re invited to one bitch of a family reunion.”

Perhaps the theatrical world is becoming jaded to these family-centric serio-comedies when it is revealed that the long-lost son who legendarily committed suicide is actually alive and you think, “Eh, I’ve heard worse.” For example, in Who’s Afraid of Virginia Woolf? (the new production appropriately housed in the same theater as Other Desert Cities), the “mythical” son takes a bit of a step further as a metaphoric weapon used by George and Martha in their emo-intellectual war games aimed at dismantling the very institution of marriage, a seemingly comforting unit of stability in the tense Cold War era. Now that’s messed up. But what makes the genre so accessible is its relatability because everyone has a family, no matter the level of estrangement (or intensity of derangement). (In fact more of both fosters even better dark comedy.) But in this familiarity it’s becoming evident that narrative innovation has grown stale. When an alcoholic becomes a “token” character, pill popping is mundane, and pot smoking is a banal bonding exercise, one must ponder: aren’t there other extremes we can explore? Or is that too terrifying? Tracy Letts’s August: Osage County brought a healthy dose of humor along with the drama, but almost selfishly took any plot of dysfunction to its literary extremity, forcing deeper, darker creativity. But then is the humor even appropriate? I say always. 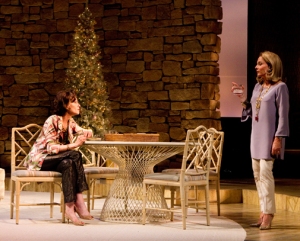 Judith Light and Stockard Channing in Other Desert Cities

Through this conflicted family, playwright Jon Robin Baitz presents an intersection of liberalism and conservatism, as demonstrated at this Christmas gathering in 2004. The stalwart Republican regime against the fluid lucidity of the liberal tidal wave. No actual policy is addressed, but rather the lifestyle ideologies of the people themselves—to use Baitz’s word, “portraits.” Although in one of the most profound lines of dialogue, Aunt Silda departs from this as she angrily shouts, “You spend your time supporting a war started by a man whose father you occasionally dine with.” An oversimplification of political motive, yes, but also a well-articulated assassination of political dependencies. Through a purely conservative lens, we see a society of oppression and intolerance; but with its purely liberal foil is revealed an unstructured world of chaos and debilitating irresponsibility. Putting it in the fictional context, Polly, a strong Texas woman who is obsessed with constructed perceptions and mortified at the possibility of people seeing past them, contrasted with her sister Silda, desperate to reveal truth but always a few too many drinks in to take a stand (ideologically or physically). Their tense but symbiotic relationship is captured through a brief exchange viewed here: Polly and Silda jest about fake Pucci. Or to put it more succinctly for the family as a whole:

Brooke: My mother said she’d never speak to me again.

Aunt Silda: I’d take that deal in a heartbeat.

Desperately at odds, but still lovingly (or spitefully) unable to detach. The meaty political analysis is surprisingly nonpartisan in its conclusion, revealing that ultimately everyone strives for the same outcome. So why does it have to be so strenuously difficult to get there? 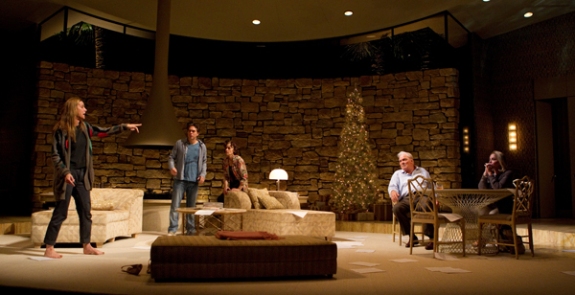 The cast of Other Desert Cities. Photos courtesy of Lincoln Center Theater and Steppenwolf Theater

Suggested wine pairing: With November 6th just around the corner, we’re all going to need a lot of whatever the suggestion is. In an attempt to honor Baitz’s nonpartisan approach to political thinking, I will not suggest red or anything produced at a vineyard whose soil was ever tilled by donkeys. A Sauvignon Blanc recommended from New Zealand might invoke imperialist sentiments… A Chardonnay from California might be deemed too liberal for our more conservative readers… Is there still resentment toward France or have we started eating their fries and toast again? It appears that everything is innately politicized—write in whatever you want.

Comments Off on “Other Desert Cities” and Other Family Drama