If you are the good theater nerd that you should be, you will find this post a redundant recap of that which you have already heard. If you are not, go take a nap, as these comments will not entertain. Having now dismissed my entire audience, I shall begin…

It has been a week. The theater yearly market wrap-up happened last Sunday with its currency of spinning medallions: the Tony Awards. If I were Matilda, I would employ some sense-of-humor marketing, hanging posters emblazoned with “Winner of 4 Tony Awards, EXCLUDING Best Musical!” As many have reported, it was a lovely year for women, with the exception of the fictitious ones Annie, Cinderella, and the aforementioned Matilda. Cyndi Lauper became the first woman to win Best Score not as part of a duo. Fifteen years after Julie Taymor became the first woman to win Best Direction of a Musical for that magnificent dog and pony show known as The Lion King, women won both directorial categories: Diane Paulus for the high-flying, acrobatic revival of Pippin and Pat MacKinnon for a personal favorite of the season, Steppenwolf’s tense but oddly playful revival of Edward Albee’s Who’s Afraid of Virginia Woolf? Another category dominated by women was Best Leading Actor in a Musical. The female identity here was confined to onstage drag personas, but the race between Billy Porter of Kinky Boots and Bertie Carvel of Matilda was one of the most competitive of the night and representative of the night’s competition overall. Fortunately for my ticket investment strategy, the few shows I was able to see this season were mainly the big winners; unfortunately for my entertainment, I found most of them underwhelming. (Given that, I need to disclaim that I didn’t see the shows that I think should have won, and thus do not have any grounds for my egregious assertions, but hey, I’m not getting paid for this.)

Best Musical: Kinky Boots is fun and entertaining—you’re never going to not have fun when drag queens are involved. But it is every bit the “glitzy drag musical” it claimed not to be; in fact it is the very definition of that. It is an attempt to cram as much La Cage Aux Folles into a less well developed or electrifying Billy Elliot. Jerry Mitchell’s choreography might benefit from a Red Bull or two and lead actor Billy Porter’s performance is contrived and cliché—an opinion that makes me a blacker sheep than when his character in drag enters the working class factory in industrial England. And neither Lauper’s exuberant pop score nor Annaleigh Ashford’s stand-out comedic performance could seem to wake up the show’s tiresome and preachy message of the cathartic capacities of self acceptance. But on Tony night, it seemed that the progressive social politics onstage were a mere vehicle for the traditionalist geo-politics playing out in the voting booths (sorry, Matilda, an import such as yourself isn’t going to win when something more American and more marketable comes along). I suppose a relevant message for me would have been “don’t think too much—just have fun!” But that’s what this blog’s focus on wine is for…

In unrelated news, where do I sign up to be Judith Light? I have not seen The Assembled Parties, for which she won her second-consecutive Tony as the Best Featured Actress in a Play, but I wouldn’t be that surprised if this year’s award wasn’t just residual praise for her stunning performance in last year’s Other Desert Cities. And I’m fine with that.

Best Play: I splurged on a Tonys-Eve ticket to Vanya & Sonia & Masha & Spike but was somewhat disappointed with this dramaturgical mouthful. This contemporary mash-up comedy of Anton Chekhov’s most famous plays, boasting what wants to be a phenomenal cast, was hyped to be hilarious & hysterical & funny & hot, but in the end is just “ha.” However my distaste may be a generational issue, as I was the youngest person in the theater and the only one not laughing. A theme is society’s increasing disconnectedness in the Digital Age, culminating in an emotional rant by Vanya (played by David Hyde Pierce). I’m not one to dismiss over-the-top comedy (…Virginia Woolf? is hardly dainty) and the playwright certainly has a point, but the Golden Age nostalgia harking back to the 1950s makes a millennial like myself wonder, “Were the 50’s really that great? Is ignorant simplicity always better?” On that note, this play is presumably funnier to people who haven’t been to college in twenty years. The characters dress up as Disney characters (who hasn’t?). They do voodoo (who doesn’t?). The writing quickly becomes conventionalized like a sitcom in its fourth or fifth season, with expected jokes coming from expected characters. I found the character of Spike, the biggest crowd pleaser of the show who spends most of his time on stage at some level of nudity, to be particularly and insufferably tedious. The type of behavior he sports is pervasive in such desolate places as E! network reality shows scorned by pretentious young sophisticates such as myself. And not only that, the humor is random and ungrounded. To think like Chekhov, the show is like a putting a water gun on the mantel in act one, then having no water in it when a character goes to squirt. It’s reasonably good for chuckle, but ultimately you feel like the designated driver at the party of the year; given the overly rambunctious audience, you hope for the state of comedy they are mostly half in the bag.

Whatever the outcome, the new Broadway season started and the American theater will survive, its kinky boots held high. In the meantime, I will be fighting all of medieval Europe for a ticket to Pippin. But in appropriate punctuation to end this year’s Tonys and season, Neil Patrick Harris’s nimbly able hosting experienced a last-minute eclipse by five-time Tony-winner Audra McDonald in the greatest moment of all time:

The girl knows how to win Tonys and drop a mic. (For the full video of the duo’s delightful duet, click here.)

Suggested wine pairing: Champagne always seems most appropriate for awards shows, but since I failed to post about my beloved love letter to romance Who’s Afraid of Virginia Woolf?, I will leave you with this 100 proof…

…but implore you to not let you evening devolve into this: 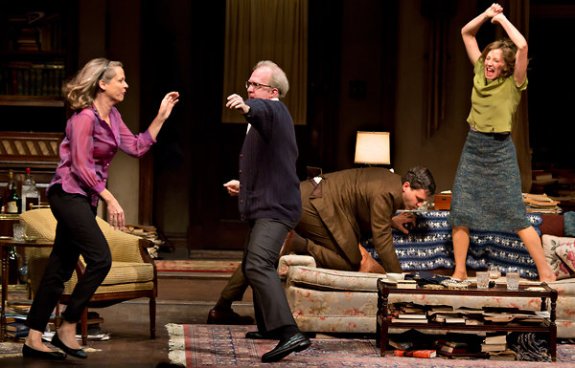 Or do and see where it takes you. Bottoms up. But drink responsibly.