The Past Six Months: Theater

Oh, hello. I didn’t see you there. I apologize for the extended absence—I know all my followers (both of you) have missed my commentary dearly. It has been a tumultuous semester that hasn’t left much time for superfluous blogging. To comment on the cultural escapades of the past six months, a summary of each in the form of a quasi-tweet (with far more characters than Twitter’s sadistic 140). For the theater revue: 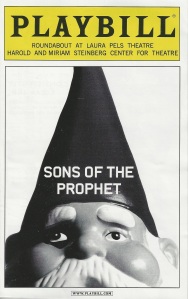 “Sons of the Prophet” Playbill

@SonsOfTheProphet: It’s jarring but highly entertaining to witness a comic analysis of the psychology of suffering. This Pulitzer-Prize finalist is a condensed but thought-provoking ride addressing many of today’s most relevant and perplexing issues with subtly and finesse. The story chronicles a family—descendants of the spiritual advisor Khalil Gibran and experiencing the recent loss of its patriarch—as they reluctantly deal with increasing exposure from the highly public death, personal health issues, care of elderly family members (comically and relatably portrayed), conflict-of-interest romantic relationships, pushy publishers with burgeoning alcoholism, and the maintenance of a decidedly private family history. And it’s all done in one act; the only critique would be this solitary, lonely one act. The sophistication of Stephen Karam’s writing and the sensitivity of the acting coalesced into a beautifully funny play asking the most complex questions of the human condition. I found myself thinking about it almost daily for literally months since its January 1st closing. So let’s have a séance to pray for a Broadway run, original cast intact and not too emotionally scarred.

@Wit: One must feel sorry for Cynthia Nixon having her fame derived from appearances in things like “Sex and the City 2: Carrie Needs to Shoe Shop on Another Continent to Realize that Even in Marriage She’s the Same Self-Absorbed Narcissist She’s Always Been.” Her acting talent far surpasses simply being an intelligently sarcastic red head; her performance as the stoic and cancer-ridden Dr. Vivienne Bearing in Wit makes one think bald is the best state for her head. Nixon skillfully navigates each line, applying the appropriate emotional pressure at the core of each scene while comically punctuating where needed. And that punctuation is very needed. Although this was the first revival of Wit (and first Broadway production), I think time will reveal that this is the new “it” role—à la Mama Rose—for actresses looking for a career-validating performance (and one of the most well-written plays in the American theater canon).

@VenusInFur: Fun, kinky, creative—not the typical adaptation of a book, and not a place to bring your parents, unless family dinners usually involve someone dressed in leather lingerie or a spiked dog collar. David Ives’s approach to this stage adaptation of the book as a simple casting session with the source material as its spine refreshingly antidotes the scores of movies plopped on stage under the guise of “a musical” whose songs sound like they were composed by a songwriting computer. And from this simple premise that theater folks know so well evolves a complex matrix of sexual politics, creative desperation, and humorous manipulation. Oh, and produces a Tony for its captivating leading lady, Nina Arianda. Vanda (the human manifestation of Venus in the play) enters with a bolt of lightning, which seems like obvious divine mediation, but the rest of the play flirts seamlessly between reality, theater, and the supernatural. It manages to never veer into the vulgar or explicit, despite being about S&M, which is refreshing, but perhaps a little too PG, especially since Venus is involved… 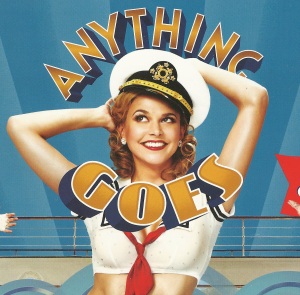 Sutton Foster as Reno Sweeney in “Anything Goes”

@AnythingGoes: Sutton Foster. The end. The woman conveys more comedy in one glance than most sitcoms in their entire run. Anyone who can tap dance for ten minutes and then belt out the last note of the song as if it were the first deserves any award we can throw her way. And she will catch it, even if mid-splits. (True fans watch the full ten minutes, which should just make you happy because tap dancing heals all wounds—perhaps the Middle East should try it.) I saw one of her final performances (probably forever), and the audience was comprised of mainly theater nerds and old gays, so it may have well just been a rock concert. It has been fun watching her illustrious stage career of indelible performances, from 1920s sassy broad to 1930s sassy broad (with a tom boy and an ogre princess sandwiched in). The Broadway world will miss her as she ventures into the only entertainment medium dying faster than live theater: broadcast television.

@ClybournePark: All those racist jokes that make people squirm come to full explosive fruition in this hilariously eye-opening, Pulitzer-Prize and Tony-winning time warp set in a single living room in Chicago at opposite ends of a fifty-year period. Act one, occurring in 1959, has a “Mad Men”-esque hindsight is 20/20 feel as you flinch at the politically incorrect invective and the characters’ blatantly racist motives—tense with uncomfortable giggles. Act two, flashing forward to 2009, emancipates any restraint as a brilliantly comic, farcical registry of contemporary race relations in our supposedly post-racial America. After each joke in Act two, you can feel the rest of the audience brace themselves as you all collectively think, “Is everyone else going to laugh at that too, or I am going to look like the philistine jerk?” Cue uproarious laughter. If you can distract yourself for an instant from the verbal bullets being fired onstage, take a moment to observe how the audience responds to each of the racist jokes told by the characters—it’s probably more indicative of people’s thoughts on the issues than even the play itself.

@TheLyons: Any play described as “an acerbic comedy” will find me in its audience. What would happen if Lucille Bluthe from “Arrested Development” and the grandpa from “Little Miss Sunshine” were married and cancerous? Act One of The Lyons. Linda Lavin’s hilarious performance as Rita serves as the play’s only sustaining force (all other acting being insufferably over the top and characters overly pugnacious), but she certainly is a powerful force. Think Karen Walker from “Will & Grace” actually interacting with her step-children. In elevating such a character to a leading role, the plot takes disparate refuge in a sea of jabs, jokes, and sass. But since I only paid $20 for my ticket, who’s complaining! And it’s possibly the most quotable show of the season, for those not overly sensitive: “My, you’re cranky. This cancer has made you really unpleasant.”

Stay tuned for Part 2—the survey of Art & Design—soon! In the mean time, suggested wine pairing: In the opening number of Anything Goes, Reno Sweeney sings, “I get no kick from champagne/Mere alcohol doesn’t thrill me at all/So tell me why should it be true/That I get a kick out of you?” How sweet…but DON’T LISTEN and drink that champagne. (She also mentions cocaine, but you’re on your own with that one.)

Anything Goes, Clybourne Park, Sons of the Prophet, The Lyons, Venus in Fur, Wit

Comments Off on The Past Six Months: Theater