This book review may be outside the scope of this blog, but since I am the author, I will do what I want, and I will never miss an opportunity to sing the praises of the smartest, funniest person ever (or at least working in Hollywood today), Tina Fey. Her new book, Bossypants, which has been on bookstore shelves for a few months (and is probably now 30% off next to Chelsea Handler’s latest mindless patter about drunken hookups and one-night stands), is part introspective autobiography, part social manifesto, and part assortment of hilarious witticisms mixed with backstage insight. It is dense with punch-in-the-stomach one-liners that are far too numerous to cite here—perhaps a quote of the day calendar would be more appropriate. The book (or audio book, as I listened to it) really serves as an excellent display of both her rapier wit and impressive intelligence, a quality that is severely lacking—or at least not readily exercised—in the entertainment business. Centered on her childhood in suburban Pennsylvania, she chronicles her youthful experience at a summer camp called Summer Showtime, her career development at Chicago’s Second City, writing and performing at “SNL,” her “dream job” on the set of “30 Rock,” and the trials and tribulations of trying to capitalize on her pending last moments of fame (with a surprisingly philanthropic motive) while being a 40-year-old mother—all of which she sums up in being a “goal-oriented, obedient, drug-free adult virgin.” 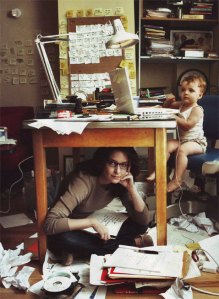 Being the intelligent, perceptive feminist that she is, the salient theme presented is sexism—with the occasional bout of heterosexism—in the workplace, particularly in the entertainment industry. To put it bluntly, she calls people out on their misogynistic shit. This theme is incredibly dominant in Fey’s work (as frequently illustrated by her fictional counterpart Liz Lemon), but her discussion is necessary because there are far too few people addressing it as assertively and tangibly on this level. Sure, “Sex and the City” and other like-minded shows have done their part in socially liberating women and exposing double standards in gender relations, but they camouflaged it in (or rather preempted it with) pretty shoes, purses, and an overall fabulous lifestyle that was really not attainable by any of them in reality (except maybe Miranda, since she did go to Harvard Law). Fey presents the issue in approachable, relatable anecdotes that highlight her unpretentious, middle-class upbringing. Even when discussing becoming a viral Internet sensation as Sarah Palin on “SNL” (something that I doubt anyone reading this will ever attain, sorry), her cool demeanor and friendly tone still make it relevant and accessible. This is one of her “East Coast media elite” problems, but she even says that phrase with the kind of witty disdain that ensures you that she knows she sounds ridiculous in saying it. Regardless, her uniquely informed feminist perspective is unparalleled in conviction and dedication, and hopefully turns some heads and changes some executive minds. 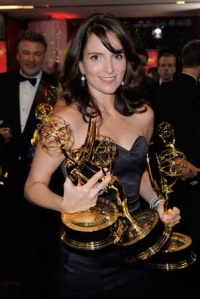 Tina’s original television show “30 Rock,” while not necessarily embraced by the public (although this is the same public that fawns over “Glee,” so maybe it doesn’t want the public’s accolades), eats awards shows for breakfast. I will not be as humble as Fey (who occasionally mentions in the book the years in which it won SEVEN plus Emmy Awards) in boasting its accomplishments because it is, in my opinion, the greatest comedy series of all time. While simultaneously being one of the funniest things you’ve ever seen, it also offers a biting social commentary through genius writing and over the top satire that invites the viewer to challenge social norms and constructs. Some find it to be over-intellectualized and, in many cases, it probably goes too far for some viewers (for example, it has done black face on multiple episodes). However, it always finds a way to counter any offensive material in a way that makes you reflect on why you are actually offended. Many things in our society are not inherently offensive, only the meaning we’ve put behind them is. That statement may sound like it came out of an undergraduate Sociology course lecture (because it did), but I think it’s presence as a paradigm of the series coupled with the exploration of many of today’s most pressing social issues is what has made “30 Rock” the impressively bold and refreshingly idiosyncratic series that it is. This upcoming season is rumored to be the final season (for which reason I will find myself in a sea of tears every Thursday at approximately 10:30 ET/9:30 CT), so my only hope for humanity is that Ms. Fey continues to write books like this…and perhaps a few more movies like “Mean Girls” (“Fetch”? It’s slang…from England.)

Comments Off on “Bossypants,” by Tina Fey